This is a push-pull RF power amplifier for the VHF band. All the specifications shown below are for 88 - 148 MHz. The low end of the VHF band should function accordingly. The functionality at the high end of the band (148 MHz - 300 MHz) is unknown at this time. This will be measured in the future.

The design consists of a linear driver stage (using the BFR193) and a push-pull stage (using the BFQ18A). A push-pull topology was chosen for fun, a good challenge, 2nd harmonic suppression, and temperature. The baluns (single ended to center tapped differential) were wound by hand using 26 gauge magnet wire. I have not characterized these baluns individually but they seem to work as intended.

The output return loss (to my surprise) was < -10 dB from 88 MHz to 148 MHz. I built an external low pass filter (LPF) with a cutoff frequency of 180 MHz (design was for 200 MHz but it shifted - oops). The s-parameters are included in a file below. The harmonic suppression should be much better but P1dB, OIP3, etc will be compromised.

I will also publish ADS design files. I don't use generic spice, but I might be able to export a spice file in case others don't have a copy of ADS lying around.

The small signal s-parameters are shown below: Large signal stability was (roughly) measured with a coupler and a long piece of coax (3-4m) that was open at one end. The output of the amplifier was connected to the input of the coupler, the output of the coupler to the long piece of coax, and the coupled port to the spectrum analyzer. While I don't have a plot, the VSWR was around 5:1 and adequate enough. As can be seen below there are no spurs in the spectrum pointing to large signal stability. 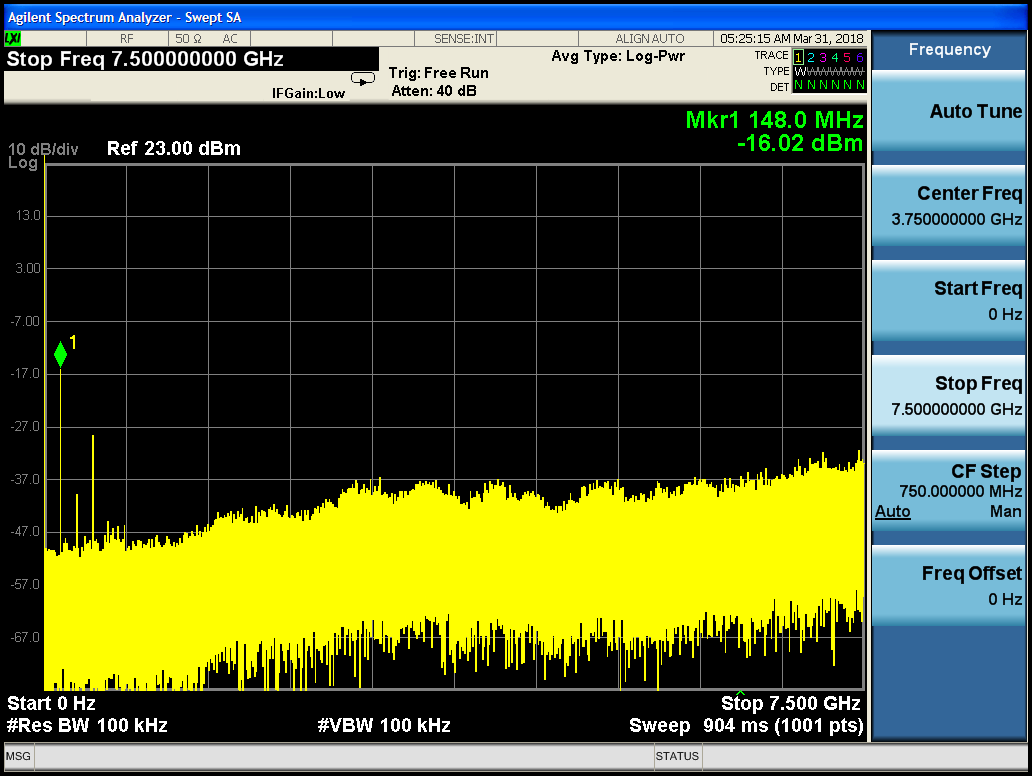 The spectrum at P1dB is shown below. The input power to the amplifier was increased in (roughly) 1 dBm steps until the output power had decreased by 1 dBm from its ideal linear trajectory. 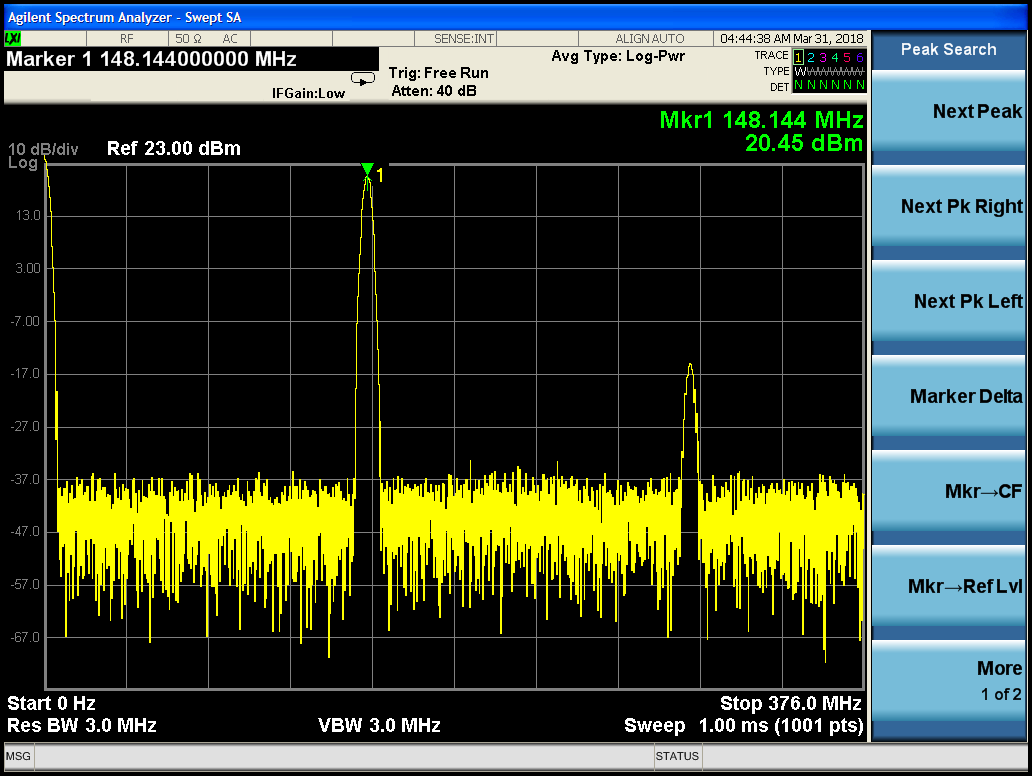 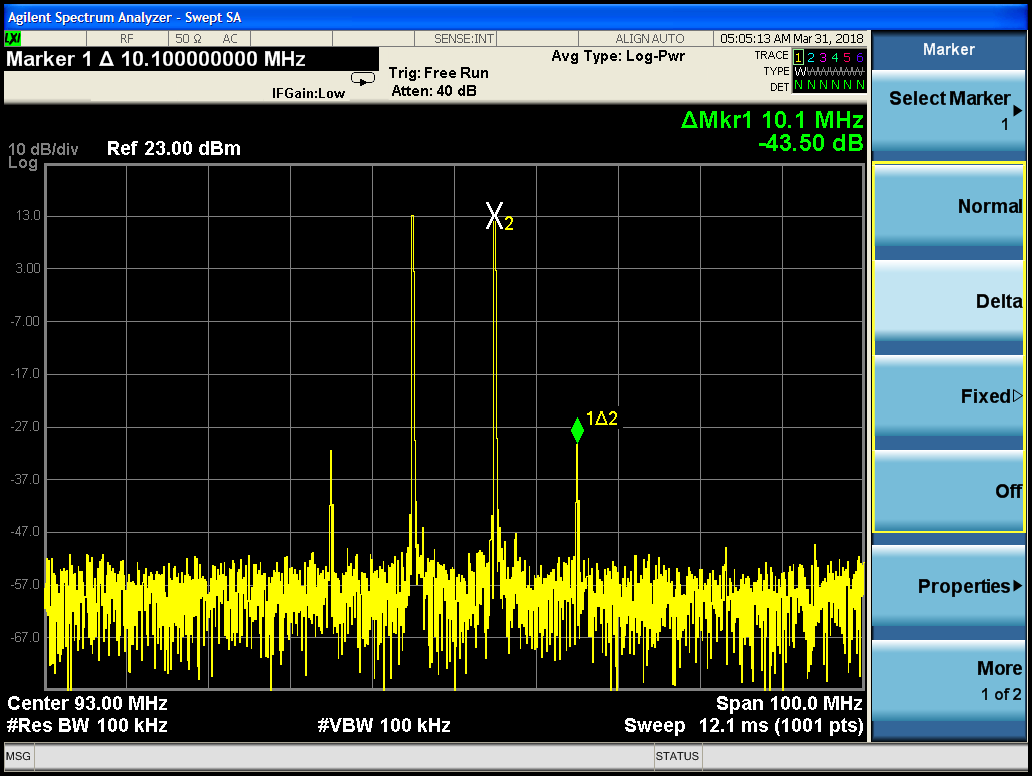 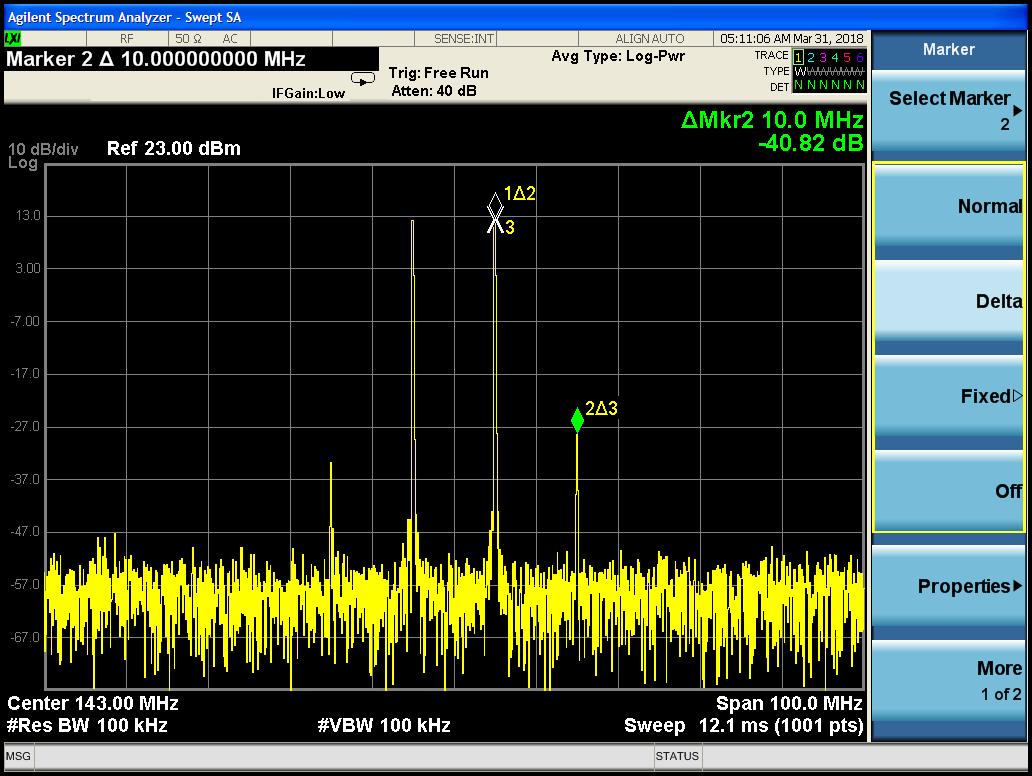 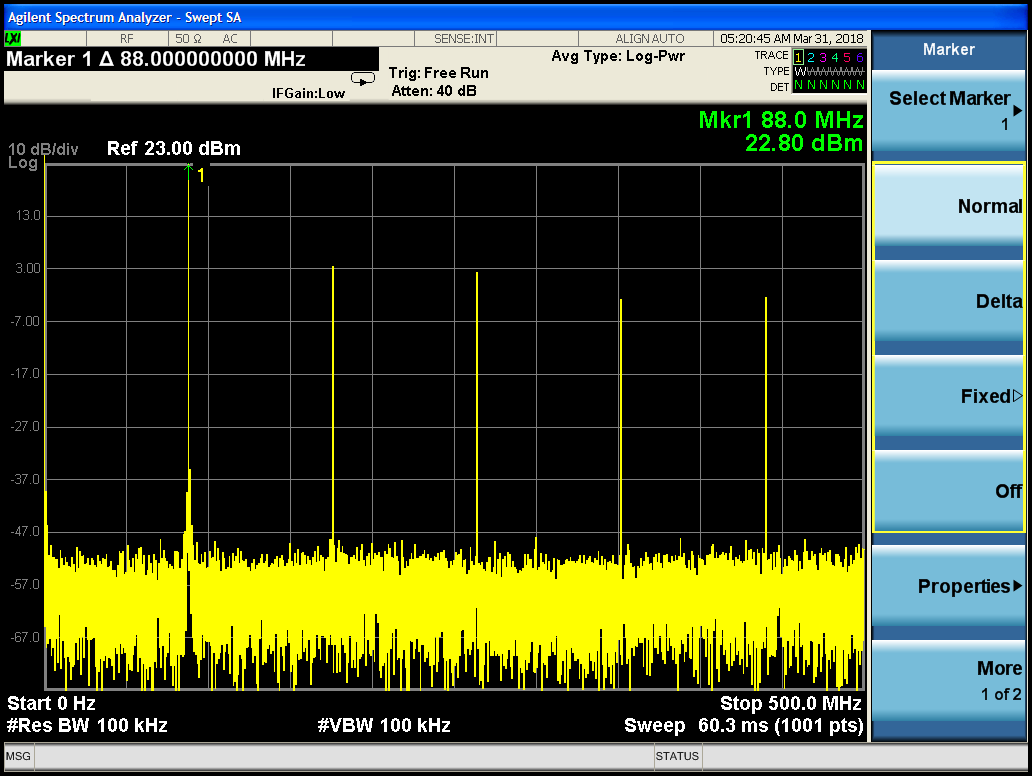 The magnitude of the second harmonic relative to the fundamental at 88 MHz is shown below. Second harmonic suppression is 22.81 dBc in this measurement. 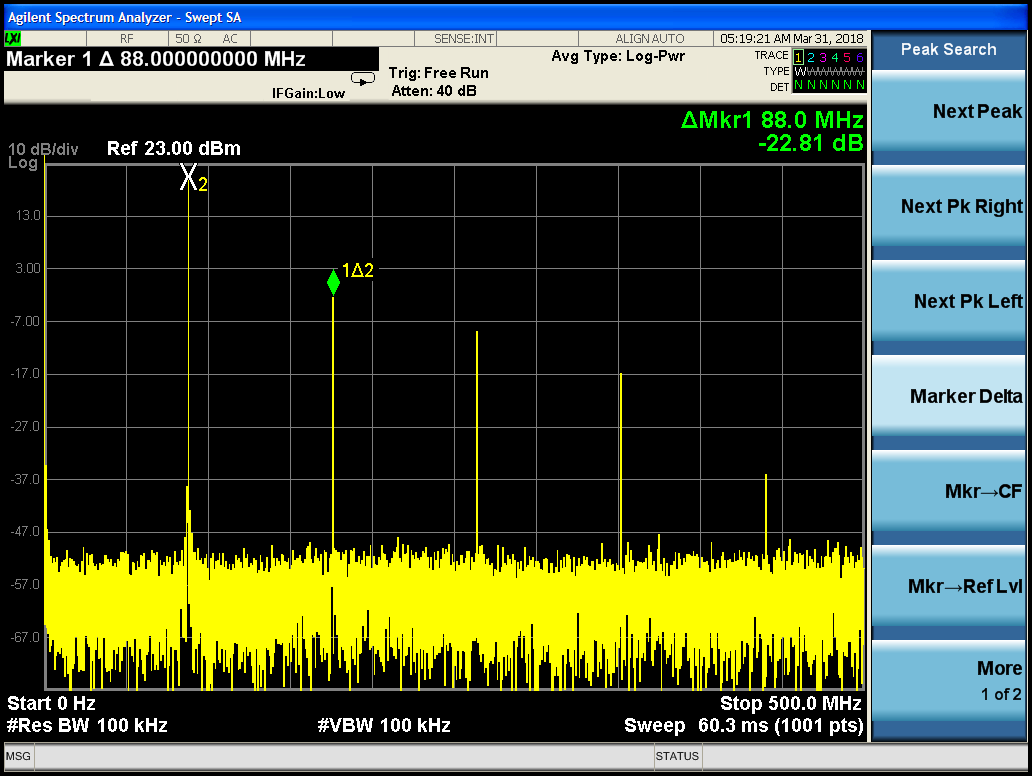 The magnitude of the third harmonic relative to the fundamental at 88 MHz is shown below. Third harmonic suppression is 29.25 dBc in this measurement. 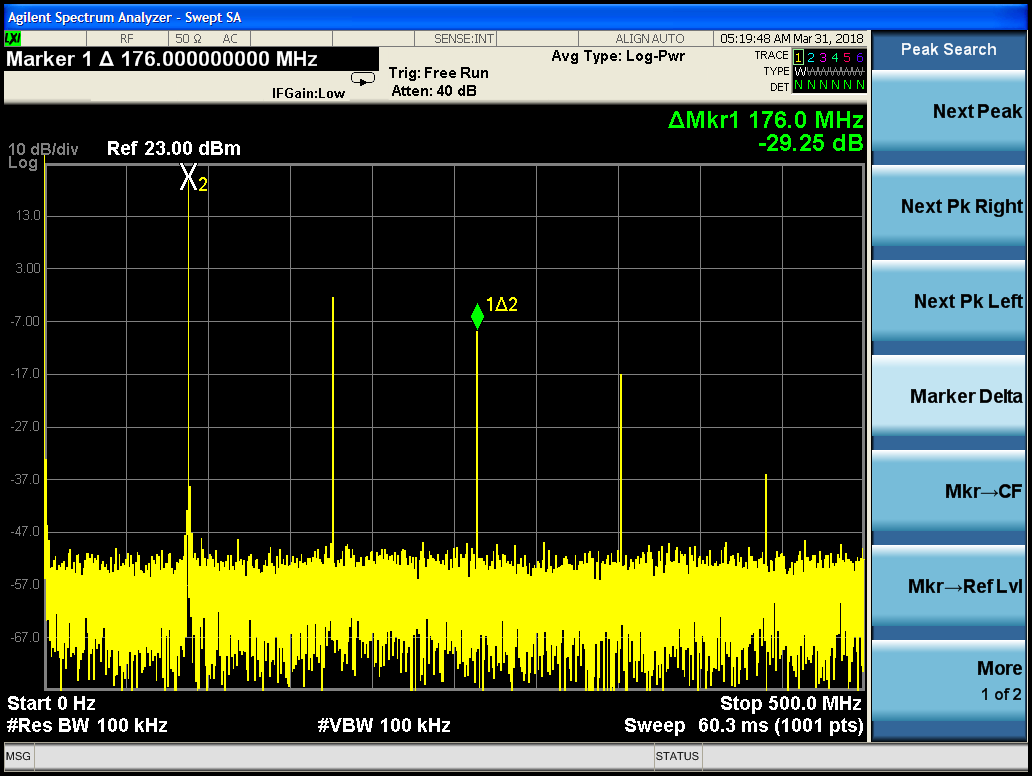 The magnitude of the second harmonic relative to the fundamental at 148 MHz is shown below. Second harmonic suppression is 36.51 dBc in this measurement. 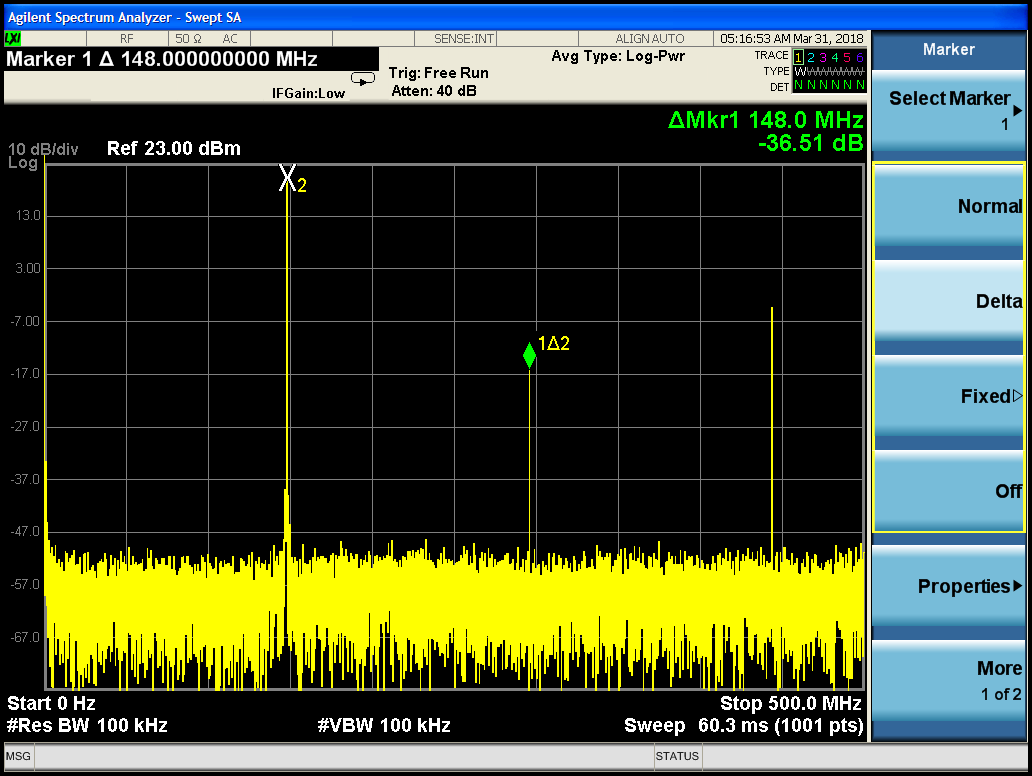 The magnitude of the third harmonic relative to the fundamental at 148 MHz is shown below. Third harmonic suppression is 24.59 dBc in this measurement. 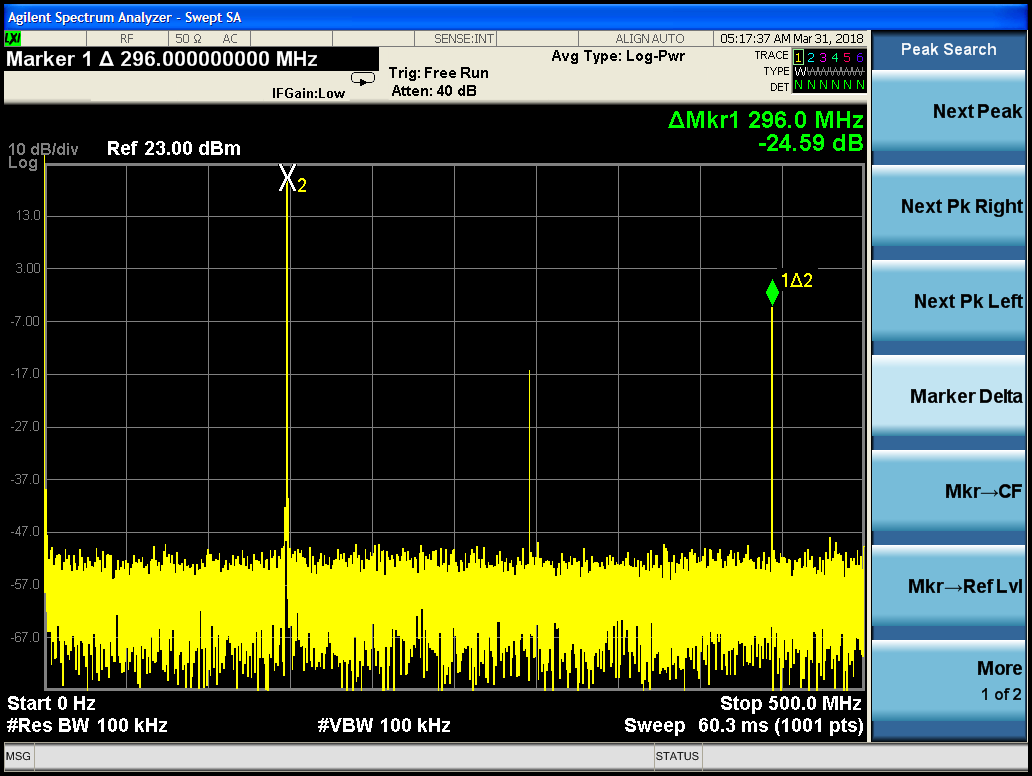