This project is an import from Altium Designer 17, thus parts are not linked to the CircuitMaker Library. I tried to save costs by using parts I had laying around. There are parts that are obsolete or recommended to upgrade. However, a BOM with the parts I used is in the attachments.

Soldering SMD components by hand is quite a tedious job, especially QFN packages or if you have more than one board to assemble. Furthermore, are solder mask stencils getting cheaper.

There are some IR reflow oven available from chinese sellers, but these have bad reviews. Another solution is the use of a toaster oven. They are normally inexpensive and able to reach a max temperature of 230°C which is enough for lead solder. To successfully reflow an assembly a reflow profile has to be followed.

The image shows the temperature profile for the lead solder I bought. A temperature controller is needed to ensure that the toaster oven follows that profile. 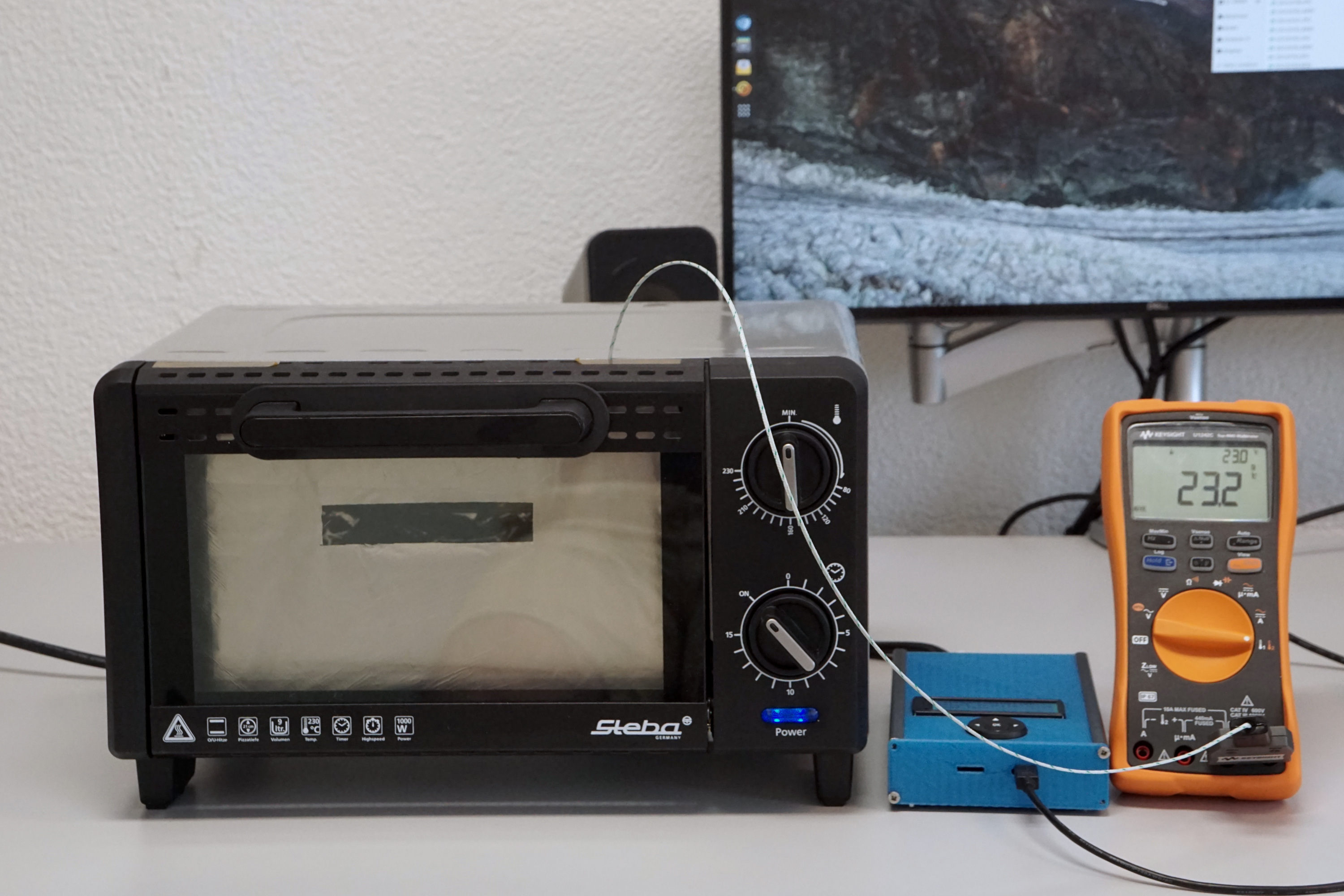 The first step is to analyse the performance and to try to make improvements. A small PCB with a thermocouple was placed in the middle of the toaster oven. Then the toaster oven was turned on to the max. A multimeter measured the temperature, which was logged on the computer. 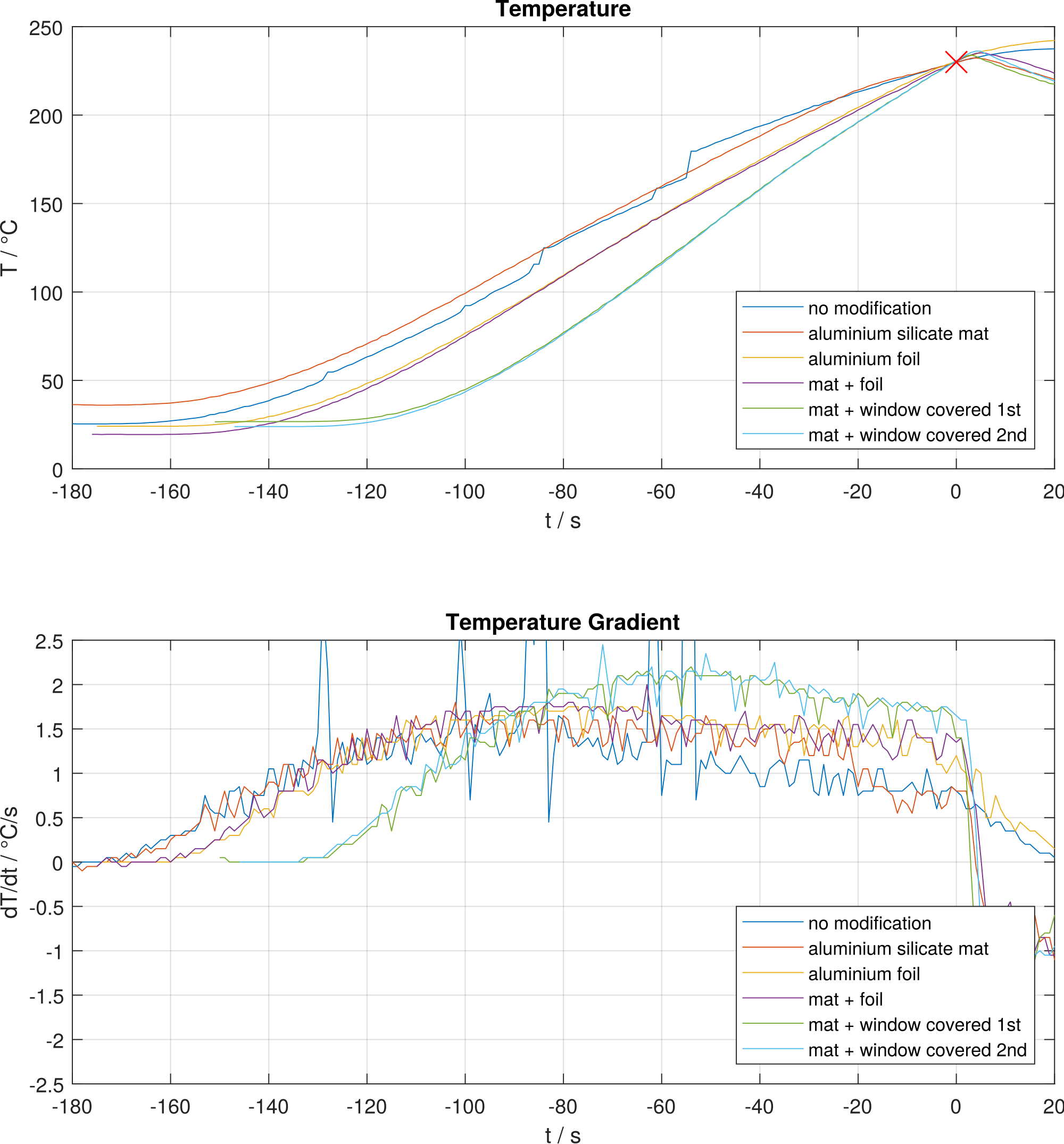 The measurements show that temperature gradient can be greatly improved (from 1°C/s to of 2°C/s) by covering the window with aluminium foil. A inexpensive and easy measure.

It is important to be able to raise the temperature within a given time period to meet the solder profile requirements.

In this chapter we will examine the system model and design a controller. For this purpose Laplace transformation and the simulation software Simulink and Matlab will be used. However, this knowledge and software is helpful but not mandatory to design your oven toaster oven reflow controller.

The block diagram shows the basic structure of a control system.

A model is needed to simulate the system. The following transfer function is used:

The integrator (1/s) means that the power injected to the heat elements is accumulated as thermal energy.

The first step is to identify the measured curved. This is done by adjusting the model parameters until the measured temperature curve matches the model simulation. 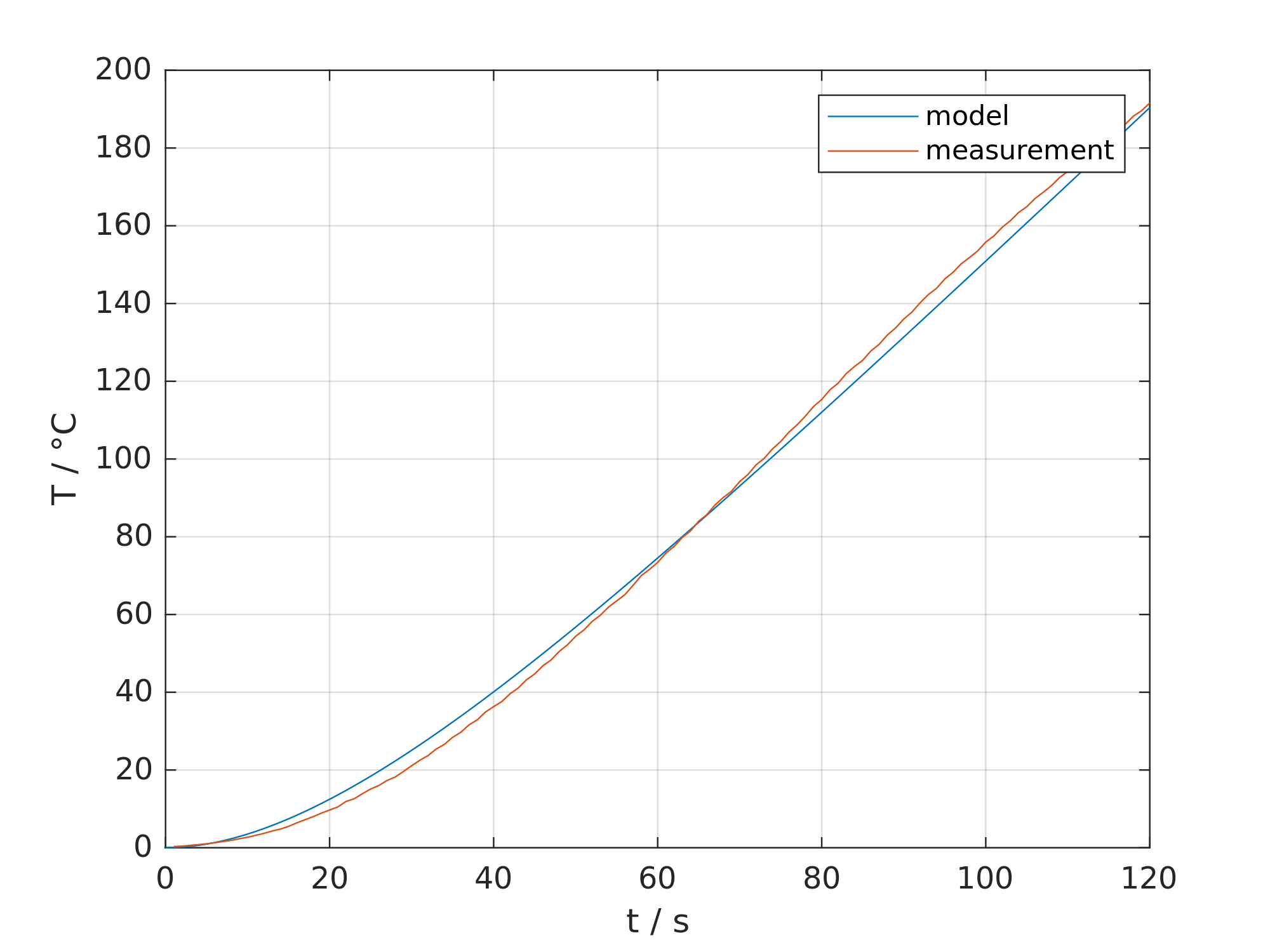 The plot implies that the temperature will always rise over time without any limit. This is flaw of our model, but this is not a real problem.

The resulting parameters are:

Next we need a controller to control the temperature in the toaster oven. PID controllers are easy to implement on a microcontroller and are well documented. The Integrator is not needed in this project because the system already has one. So a PD controller is used:

The following bode plot shows the open loop control path (blue) and the regulated system (red) in the frequency domain. 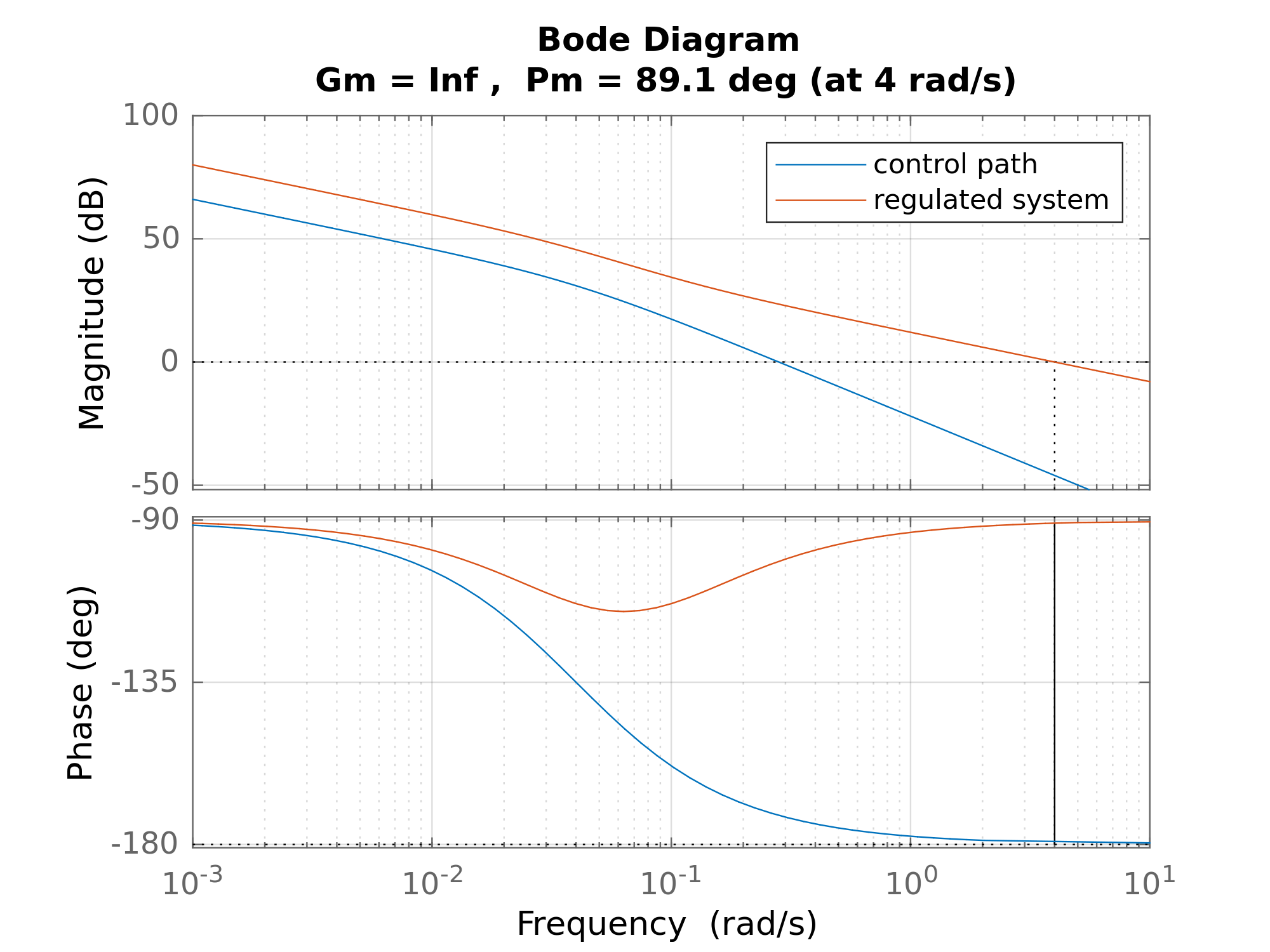 The goal here is to have a phase margin of more than 60° at the point the gain crosses the 0dB line and to increase the frequency at which the gain crosses 0dB. The aimed bandwidth is about 1 rad/s (it actually is 4 rad/s). To achieve that the derivative part (adds 90° to phase) of the controller is placed at 0.1 rad/s and the proportional part is set to 14dB. The simulated bandwidth is 4 rad/s and phase margin is 89°. These are both good values for this system. The resulting parameters are:

To implement the controller the transfer function has to be changed to the additive form:

To test if the controller has chance to work in the real world, it has to be tested in the time domain.

The schematics show the structure of the system. The simulation also takes into account that the heat elements are controller via solid state relay (SSR) and can only be switch on or off. 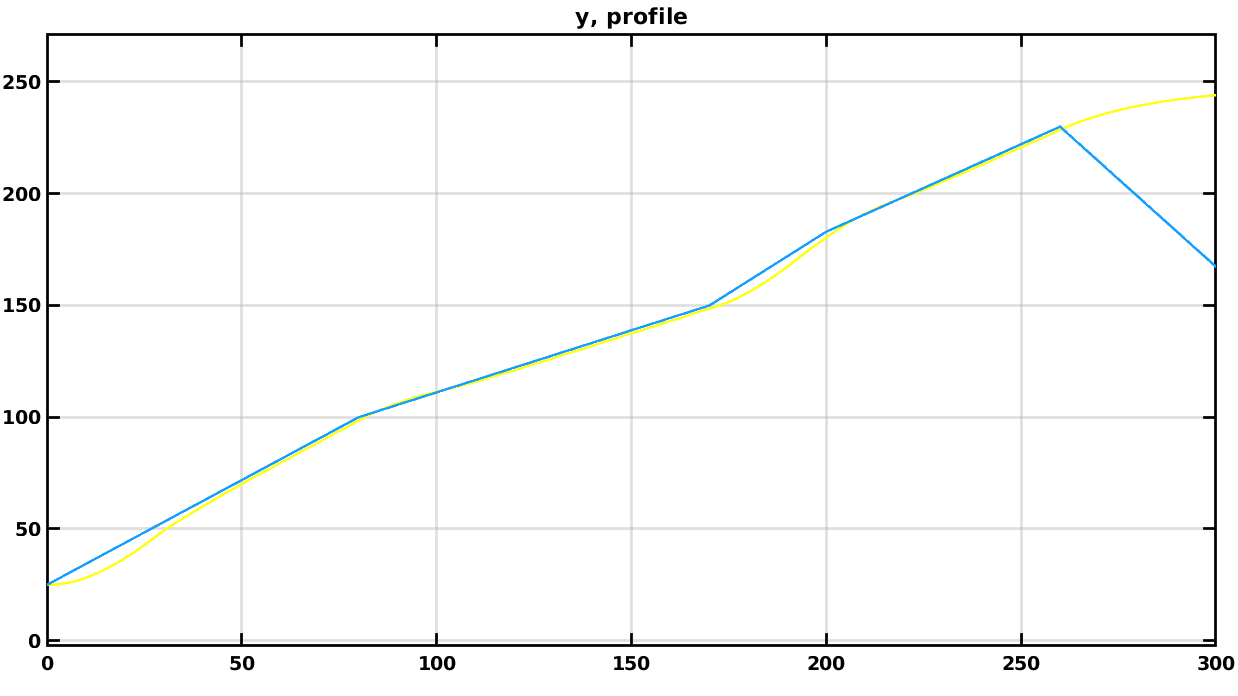 Instead of a system model and simulation based approach the controller parameters could also be evaluated manually.

The following features are implemented on the PCB:

Some more components were needed to complete the project:

The basic project configuration was done with STM32CubeMX. This allowed to easily configure the hardware abstraction layer (HAL) and provided additional services like FreeRTOS. 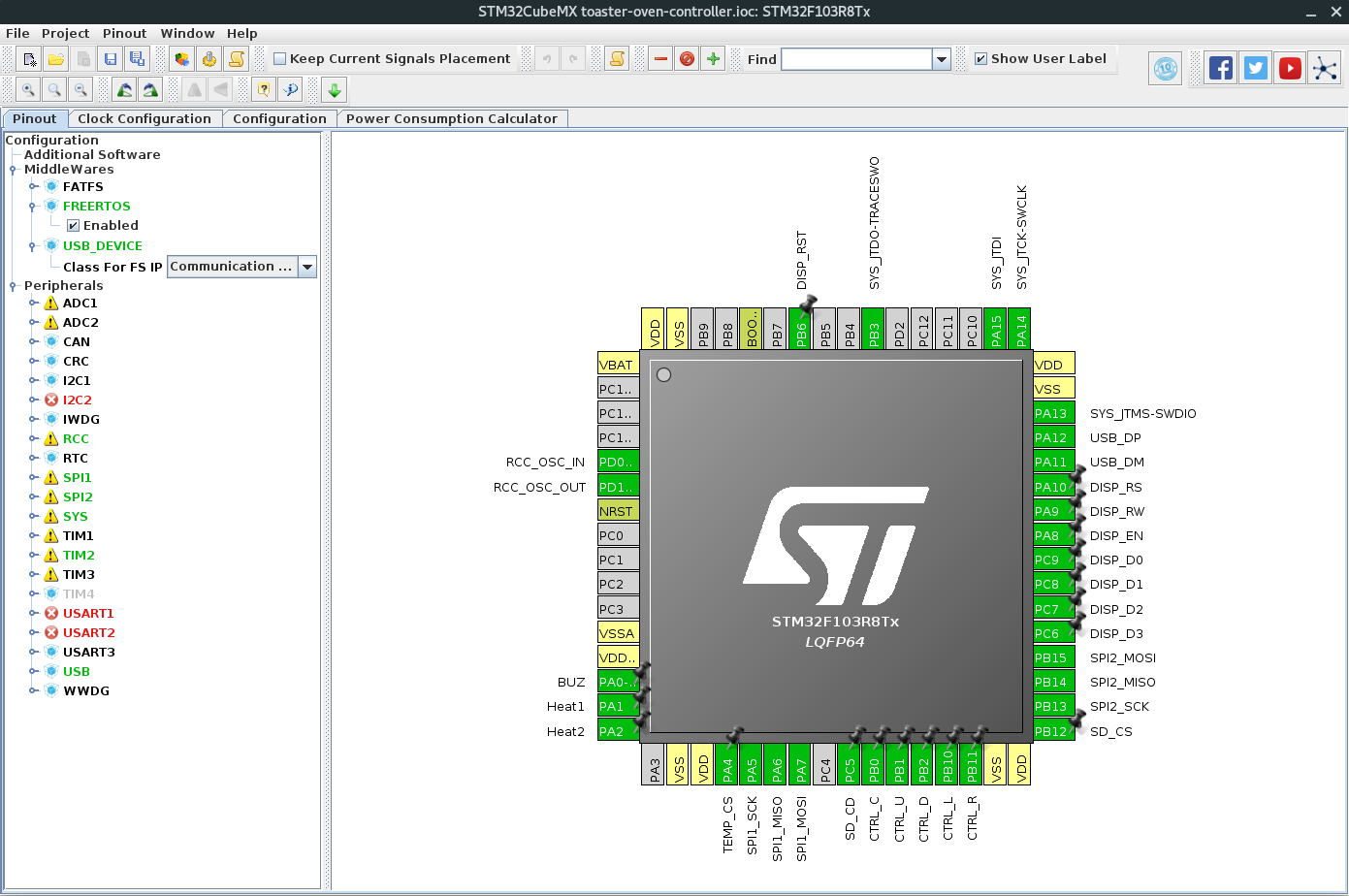 CLion was use as IDE. This IDE requires a license but code can be compile with GCC.

The following features are implemented in the firmware:

The firmware project can be found on GitLab.

The complete reflow oven was tested by soldering another project. 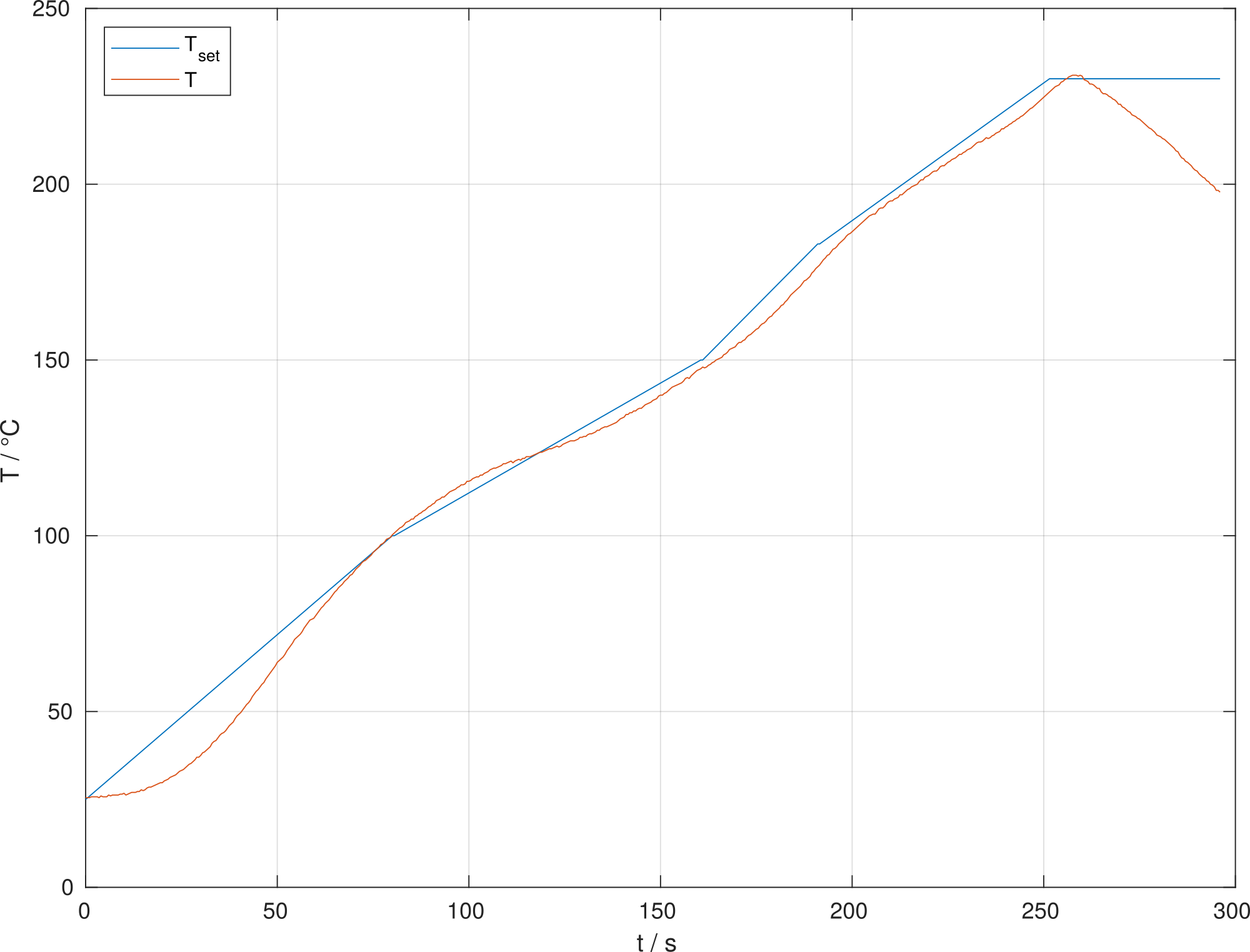 The plot shows the set temperature (blue) and the actual temperature (red). The temperature is not perfect and as good as the simulation but it is within acceptable margins. 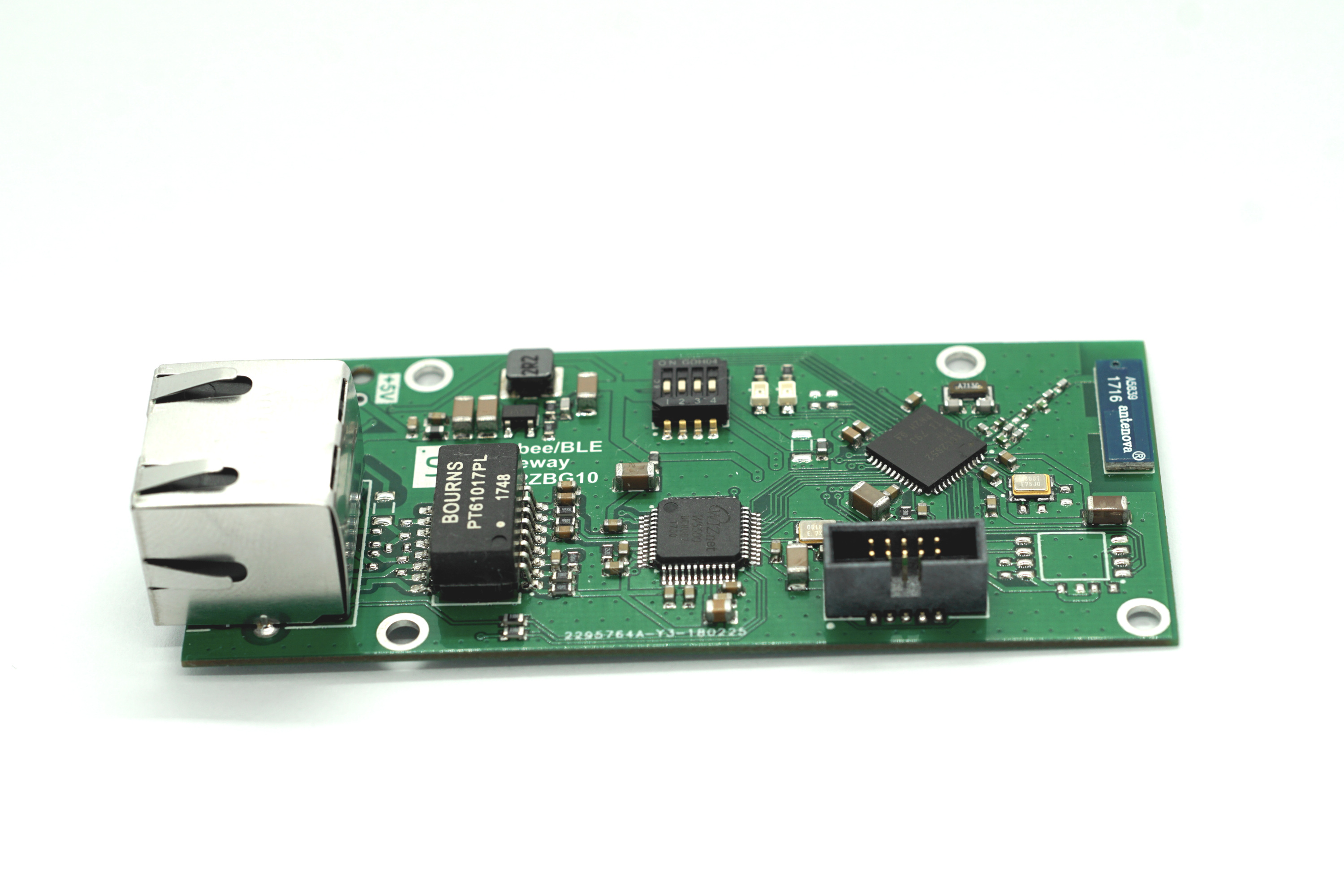 The video below shows the reflow process:

V1.0 Assembled and Tested, Some Errors

V1.1 Mistakes corrected in schematics and layout, no PCB was ordered