Your message was succesfully sent!

Add The Following Snippet To Your Html

This project represents what I believe can be a very effective tool for makers in the electronics and microcontrollers world: a portable, battery operated, voltage and current controlled power supply you can control via a mobile application on your smartphone.

When it comes to power supplies there are multiple factors influencing their effectiveness, some though are more important than others when you live your passion in the world of microcontrollers.

FlexiPower, with its limited power rating,  is certainly not intended as a replacement for a benchtop power supply, but when it comes to portability and stability it can probably be classified in the higher ranks.

The design is simple and tries to minimize component costs while still providing a range of capabilities useful for makers in the field:

Dave Jones, the author of the core power supply design, has gone through an extensive description of all the critical choices, the design evolutions over time and all the details in a series of YouTube videos: I will try to briefly summarize here only the key parts and my additions.

I've designed FlexiPower as to provide two completely independent supply channels, which I've modularized into their own schematic, and most of the following considerations will apply to each one of those separately.

The power supply is battery powered by two cells Li-Ion or Li-Poly battery: this provides a maximum voltage of 8.4V when fully charged. Lower voltages are achieved simply by feeding the battery output into a high current, very stable, linear voltage regulator, the LT3080, capable to deliver up to 1.1A.

To reach the higher voltages desired at the supply output the battery is fed into a voltage step-up circuit, which I've modularized into its own schematics, having an MIC2253 integrated at its heart. The output of this device can be controlled via a potentiometer (a digital SPI in our case) and enabled at will. With the booster circuit disabled the battery power goes into the voltage regulator with an additional voltage drop of around 0.5V (the Schottky diode), that implies the controller logic will enable the booster circuit only when necessary. This reduces considerably the amount of power wasted and thermal dissipation is substantially simplified: the entire power supply can operate fanless.

Measuring the produced voltage is key to perform the necessary variations to adjust the output accordingly so to provide the desired result.  We use a precision voltage reference of 2.048V and a simple voltage divider along with the 10 bit ADC built into the microcontroller to determine the output voltage with a 20mV precision. The same voltage reference is also fed into a 10 bit DAC which output is then multiplied by a factor of 10 by an OpAmp to get a 20mV resolution in controlling the output desired on the LT3080.

Current measuring is similarly performed via different paths, depending on the output level, but in both cases it's based on a 1 Ohm shunt resistor network made by ten 10 Ohm 1% 1/4W resistors in parallel: this results in a voltage drop of 1mV per mA and a maximum power capacity way above the required 1W with a precision statistically better than the 1% of each component resistor.

In case of currents lower than 320mA, the INA219 integrated circuit is used to obtain a very precise reading with a resolution varying from 10uA (yes, microamps!) for very low currents (up to 40mA) to 80uA.

When the supplied current goes above the capacity of the INA219 shunt resistor voltage drop is measured using the microcontroller built-in 10 bit ADC but an OpAmp is used to remove any disturbance in the readings.

Current limiting is performed in a very simple way: a PWM signal is output from the microcontroller into a low pass filter circuit which produces a quite stable voltage between 0V and 1.055V: the filtered output is then fed into the inverting input of an OpAmp in a comparator configuration. At the same time, the current sensing voltage is fed into the non-inverting input of the comparator: whenever the shunt resistor voltage drop goes above the value set via the PWM, the comparator output gets pulled to GND and the output is turned off.

A non-grounded power supply has many advantages, one being you are no more subject to ground loops or short circuits as your project will be floating: if that doesn't mean much to you than a device like FlexiPower is what can save your day. As previously stated FlexiPower operates from 2 Li-Ion / Li-Poly 18650 cells in series (2S1P).

Battery power requires some control, especially when you are operating from rechargeable batteries: you don't want the voltage to get too low to prevent permanent damage and you want to avoid overcharging, to prevent fire and explosions.

The battery pack can be charged via the barrel jack connecting a 12V source capable of around 1A: the MCP73213 is a tiny little device intended for battery charge management that can have the charge current set with just a resistor.

The FlexiPower has been designed to have no physical user controls, the only provided feedback is via LEDs:

The RGB LED is fundamental for operating remotely and it's driven by an ESP8266-11 module which provides the necessary connectivity over WiFi (802.11 b/g/n).

On boot the device will activate an access point with a FlexiPower SSID: devices can connect to that wireless access point to control the power supply. The RGB LED will indicate connection status:

I'm evaluating the possibility to let the power supply try to connect a known WiFi network (empty by default), but if that fails it will fall back to the normal sequence. The drawback is the slower bootup, but that would allow the possibility to control the device at a greater distance, even via Internet if network configuration allows it.

I wanted to make the supply capable of data logging because more than often my projects run on battery and power consumption is of the essence: this implies I try to turn my projects into sleep mode and turn on power only when needed. I wanted to be able to roughly measure current variations over time, but I wanted to do so without pushing a bigger LCD into the design, so the choice went for re-using what almost every one of us already has: a smartphone.

With a virtual screen come virtual controls, practically unlimited data logging and quite advanced data visualization capabilities. Being a software developer I've already developed mobile apps and I know such control application will be quite easy to develop... 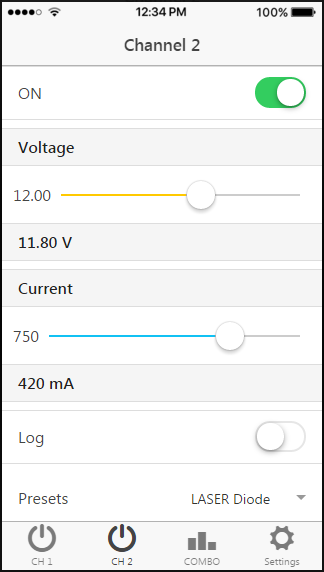 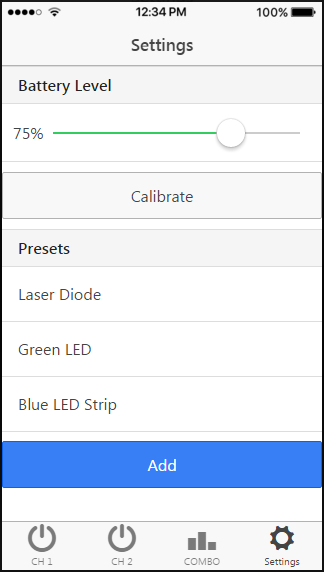 The power supply design is not entirely my own work, actually I consider it an adaptation of the uSupply project (REV C) from Dave Jones, the host of the quite popular EEVBlog. He has been so kind to share his design under the CC BY-SA license and I decided to bring forward his work along the direction I thought would have fit my needs, possibly somebody else too.

I initially submitted my ideas to Dave in order to work together on this, but he had his reasons not to do so: I'm sure the whole FlexiPower would have been much better with him aboard, but you are free to improve and, if you wish, contribute back.

I've selected Dangerous Prototypes as PCB manufacturer, as a consequence, I had to slightly modify some design rules to accommodate their constraints. I was actually well impressed by the result, especially considering I went for vias full tenting and I also had some vias for thermal relief: have a look at the few detailed shots available in the gallery.

The first produced PCB presented a few errors which I have highlighted in the picture below and have been now fixed: 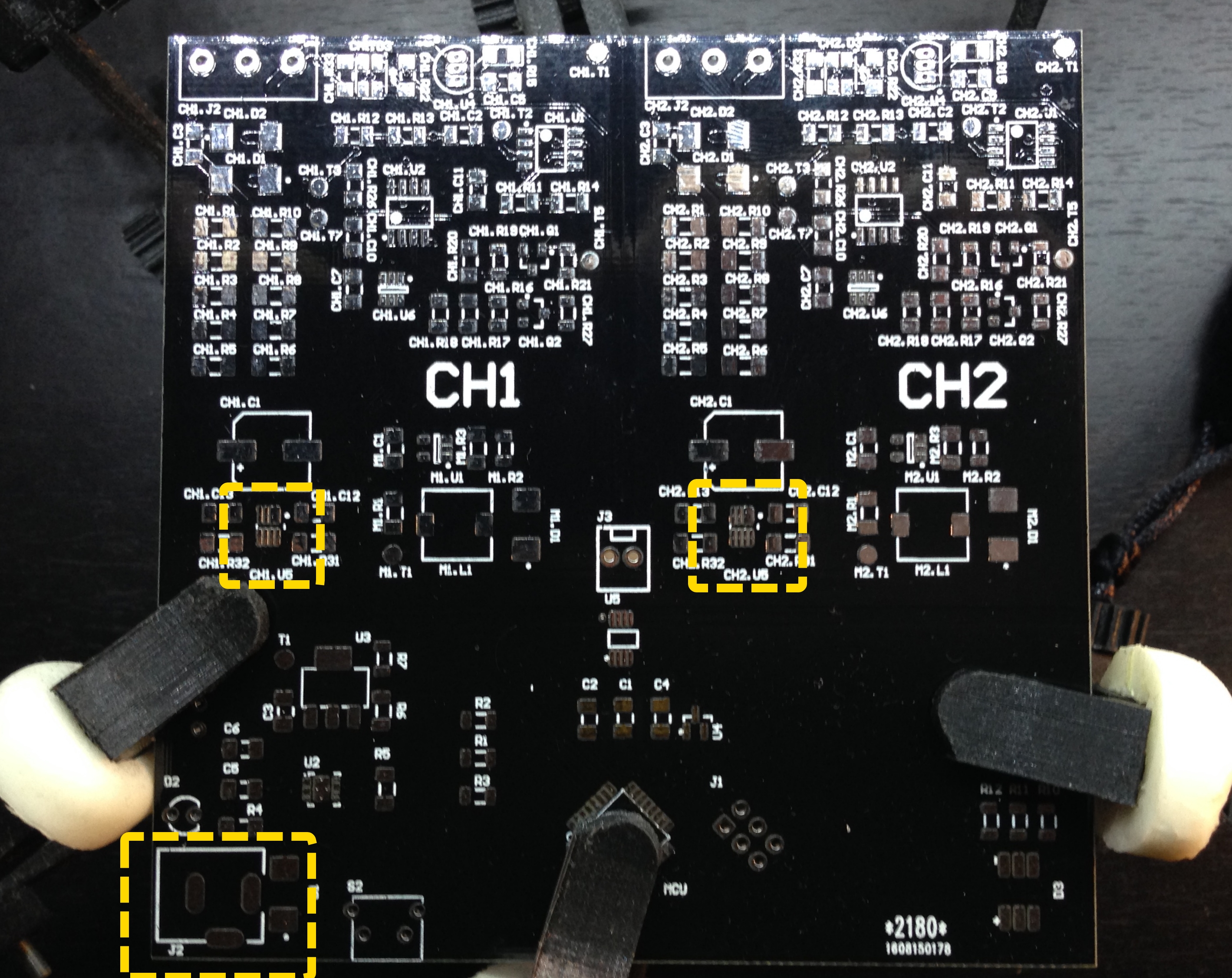 Soldering the components on the PCB took me almost 4 hours just for one channel: this was my very first time with SMD soldering and some components have a real tough footprint. On top of that, I also had to troubleshoot the issues mentioned above, which was not an easy task, believe me.

The outcome has been captured in the picture below: note the missing component at CH1.U5, the INA219 mentioned above was causing a short between SDA and SCL and I had to desolder it. It's not that bad, isn't it? 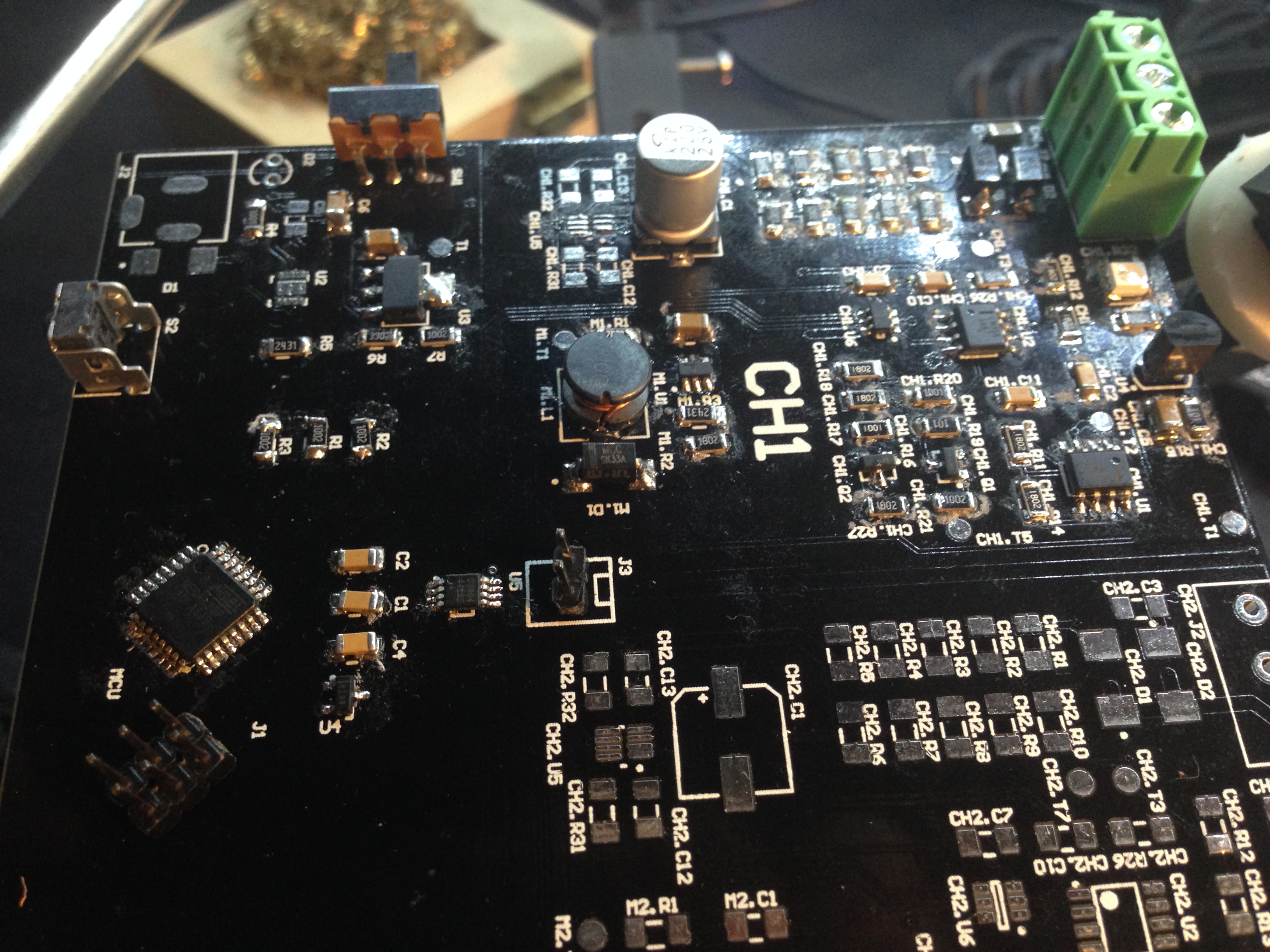 Obviously, nothing works at first try and FlexiPower is not an exception. Here is my setup while debugging the I2C issues I've encountered using my 6 helping hands rig to keep cables distant in order to avoid potential shorts, an USBasp programmer connected via ISP to the ATmega328P and a simple USB2TTL to tap into the RX/TX lines and have access to the serial interface.

Firmware, which is not yet finished, is being developed using Eclipse Mars plus Sloeber: the configurations I had to apply in order to get up and running have been described in two posts on my blog: one related to the USBasp drivers for Windows 10 and another regarding the production of an ATmega328 binary. 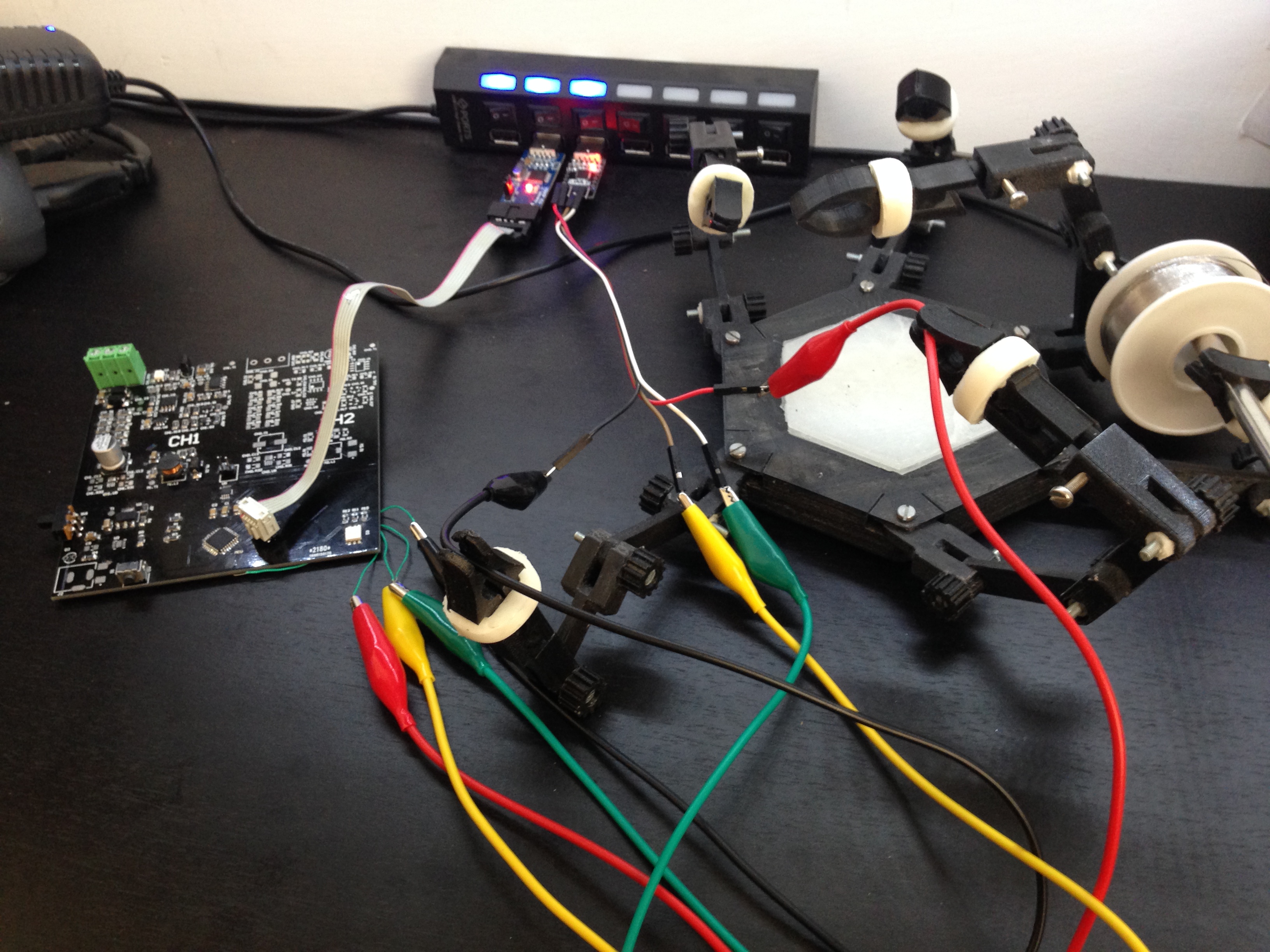 There are no requests to display
Please wait...

Use the field below to search for the desired community maker. In the results listing, use the drop-down field to set the access rights for the maker as required, then click the plus button to grant those rights.

There are no components or releases to display
Components
Please wait...
Releases
Date of Release
Maker

Are you sure you want to delete this Release?

This action cannot be undone.

Please, open this page in browser and download file from there.

To copy hyperlink, press Ctrl+C with selected text below:

HUBS THIS PROJECT BELONGS TO

There are no hubs to display

Thanks for Joining the CircuitMaker Community! An email with your account activation details is on its way.

The projects created using CircuitMaker may include certain open source software or hardware designs originated from third parties that is subject to the GNU General Public License (GPL), GNU Library/Lesser General Public License (LGPL) and different and/or additional copyright licenses, disclaimers, and notices. By checking the “I agree” line below, you acknowledge that any project you post, including any design files and source code, will be public information and may be subject to one or more open source software or hardware licenses. Please refer to the exact terms of the GPL and LGPL at http://www.fsf.org (Free Software Foundation) or http://www.opensource.org (Open Source Initiative) regarding your rights under said licenses. You also acknowledge that by signing up to use CircuitMaker, you agree that Altium can send you occasional emails with news about CircuitMaker and our partner service, components, and reference designs. Altium will never give your email address to any third party.